I’ve recently signed up Ponoko’s Prime account and wanted to get something made.  I rather into a rather annoying problem, Alibre Xpress doesn’t have a SVG export.  I needed a way to design something and export it as SVG.

I’ll admit the long post title is a problem too 🙂

After searching the forums for a solution… I stumbled across a very promising method by using Alibre to export to DXF, using OpenOffice draw to import the DXF and then save-as SVG.  Summary result – it didn’t work.  OpenOffice had trouble opening the DXF file and so did the developmental release of Inkscape which includes a native DXF import.

Then I thought of using Google SketchUp instead of Alibre Xpress because there was the possibility that it’ll work under Ubuntu with Wine rather than me popping back to windows just to use Alibre [Which doesn’t work with Wine].  First of all, I couldn’t get it working with Wine because of my laptop graphics card, but apparently it works for other people if you follow the winehq wiki help.  But I wasn’t going to give up… back to windows I go and some more googling research later I stumbled upon some interesting plugins for google sketchup.

Flight of ideas has created a plug-in for the purpose of exporting SketchUp models into Ponoko friendly SVG files.  Go to his blog or the plug-in page for intructions on how to install and use the plugin, but here are some screenshots to get you interested. 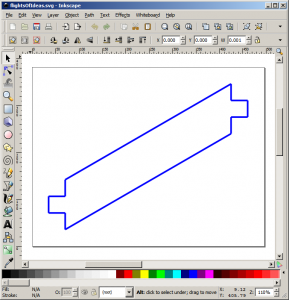 Driving Dimensions is a sketchup plugin that attempts to add parametric capabilities onto sketchup.  I’m pretty sure this is a pretty well kept secret because there weren’t all that many people that have downloaded this plug-in (I was the 938th person).  Whilst it is an interesting concept, functionality is rather limited on the current early releases.  Basically you can add linear dimensions and angular dimensions onto lines/objects/whatever and the plugin will manage the these parametric constraints for you.  While it sounds good, in practice its still a nightmare to use because the sheer amount of (dimension) constraints you have to add to fully constrain a sketch.

Scratch this idea too…

Hidden away (I couldn’t find the navigation link at all from the alibre webpage!) and apparently only accessible if you know the exact name of the plugin and by a google search is the Alibre 3D Publisher (linked to save you the pain).  This plugin allows for direct export to Google Sketchup as a version 6 file which can be used with SketchUp 7.

Ouch, what are all those triangles if you turn on view hidden geometry in sketchup?  It looks like everything has been triangulated and the svg plugin export picks up all those as individual faces.  One way to ‘fix this’ is to manually select these edges and delete them.  Another way is to automate the process somewhat with a ‘Ruby script’.  But both are too messy for my liking.  The plugin isn’t right for me to use for SVG exporting, but its great for getting a model into sketchup for viewing.

Back to square one…the DXF export…and it works!

While writing this I thought I’ll try the DXF export again and realised that Google SketchUp reads the Alibre Xpress DXFs pretty well.

Voila, SVG for ponoko… its messy but hey it works.  Maybe one day I’ll consider using Inkscape by itself…

Edit : Be careful on the Google SketchUp import because it defaults to ‘feet’ as the units!  If you modeled in ‘mm’ then things go horribly big.  Click ‘Options’ on the import open dialog before you press OK and select the right units!