The ‘quick and nasty’ software files are still the same as in the previous post.  Pure software test only, couldn’t resist the temptation to try it via WiFi on a stock Chumby instead of USB tethering.  As such the hardware frame is a bit too flimsy and the batteries aren’t enough to power the Chumby without brown-out resets.  These will be improved upon soon 🙂

This demonstrates the ‘touch’ (initialize) and ‘swipe’ (move/offset) control on touch screens.  Will try the DeviceMotion Javascript API on iOS 4.2 devices (iPhone 4G/iPad) if I can get my hands on that filth… 😛

END_OF_DOCUMENT_TOKEN_TO_BE_REPLACED

Well I’ve installed the official HTC Magic update with the new Sense UI a week ago and I have to say I’m pleasant amazed at HTC’s work with the Sense UI and how responsive the update is.  Just purely love it. 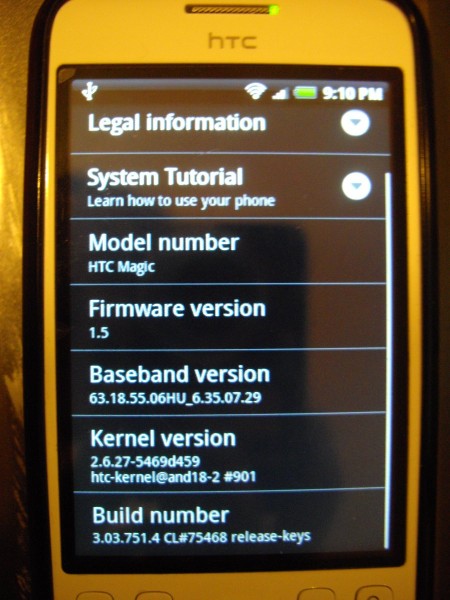 Other than the annoying thing that I couldn’t download it using Firefox or Linux, and that you need to update using Windows and HTC Sync… its awesome.  Even though it’s a Taiwan ChungHwa ROM, there is an English option luckily 🙂

In addition to the Sense UI and its wonderful feature set, another interesting but hidden away feature is “Mobile Internet Sharing”, aka tethering!  Azilink is now redundant with this new firmware, and honestly I was getting annoyed with Azilink’s performance and constant dropping out.  On Ubuntu at least, it was ‘plug-and-play’ without any other tricks.  Awesome.

Photos (pretty boring) after the break.

END_OF_DOCUMENT_TOKEN_TO_BE_REPLACED

Yes, that is “Colour” not “Color” for all your Americans out there! 🙂

END_OF_DOCUMENT_TOKEN_TO_BE_REPLACED

Ordered from BecexTech on monday evening, package arrived thursday – not a bad turn around time at all and price was reasonable.  The package was shipped from Hong Kong, but the original phone appears to be from Taiwan with some carrier logo on bootup and some pre-installed widgets/apps that can be quickly hidden away.  Very considerate of them to include a little Australian plug adaptor, its like $1AUD in HK, but costs like $10AUD ($50HKD) to buy one here…Wouldn’t recommend getting that case for anyone else.  Screen protector was a perfect fit and a must have.